Polmont green opened after returfing when Mrs. Mitchell of Millfield opened the green by throwing the silver jack on Saturday 7th June 1902.


The chairman, club president Mr. T. B. Lawrie said in his remarks, that it was 23 years and two days since the first game of bowls was played under the name of Polmont Bowling Club.

That game was played on a green in Millfield policy grounds, the use of which was granted by Mr. Campbell, the proprietor. The club carried on the game there for some three years, after which they resolved to acquire a new green for themselves. In the records of the club the green was described as lying between Miss Colston’s school and the post office they all knew the ground to which he referred, and the established church hall had now been built on the site of the old bowling green. It was rather coincidence also that it was on the 7th June 1878 that the club decided to form a new green, and it was on the 7th June 1902, 25 years since, that the club had arranged to open their newly turfed green, although they were no celebrating their semi-jubilee, it was 25 years since they had a green of their own.

Of the original members there were only five who remained and he was glad to see several of them present that day. A number of the old members had left the club because they had gone to other parts of the country.

In 1894 the club resolved to open a new green because of their growing membership and the feeling amongst them that they were always handicapped in their friendly and trophy matches because of the imperfect green they had always played upon.

Everyone would admit it was a most imperfect green, they could only play three rinks and they had all to be played the one way from east to west. It was good enough in a way but when they had visitors from other clubs playing friendly matches with them, these gentlemen although they could give a good account of themselves on other greens frequently found that they had to lower their colours to the Polmont members because they could not play on their green. The Polmont club were always stated to have won because of the state of their green, but he trusted that in future years no county club would ever say that they had beat them because they had not had a fair chance, as he had no doubt every bowler who came to play on their present green would find everything to his hearts content.

They decided in 1894 to form a new green, and considering the rapid development of the parish in the vicinity of Polmont station the committee were led to seek for ground in that district with the result that they secured this piece of ground from Mr. Mitchell at a very reasonable rent and on 1st May 1895, Mrs. Mitchell opened this green. Unfortunately they were very unfortunate in they selection of a contractor they neither got the turf or the workmanship with the result that it was found necessary last year to consider seriously whether they should not returf their ground. That brought them to to the ceremony of today. After considerable inquiry the committee resolved to engage Mr. Leslie, Glasgow, to returf the green having found that he had laid a number of excellent greens elsewhere. They would admit today, after they had tried and tested the green, that Mr. Leslie had given them an excellent job.

It was a most fitting thing that Mrs. Mitchell of Millfield should perform the opening ceremony, seeing that Mr. Mitchell, their honorary president, was elected president of the club in 1886, since which time he has shown the deepest interest in it’s success. He was known to all as a gentleman who not only took an interest in bowling but, in every philanthropic work he was one of the first to lend a helping hand. Mrs. Mitchell had very kindly agreed to come amongst them today to perform the opening ceremony, and he had the greatest pleasure, on behalf of the club in asking Mrs. Mitchell to take the silver jack, and by throwing it up the green, to declare their green open for the season. He had just to add that he wished Mrs. Mitchell to accept of this silver inkstand, and silver jack which had been very kindly presented by the contractor, Mr. Leslie, and keep them as mementos of the occasion when she opened the green of the Polmont Bowling Club.

Mrs. Mitchell then threw the silver jack, and said “I have much pleasure in declaring this beautiful green open, and I hope many happy games will be played on it, and that it will be a source of great pleasure for many years to come”. Three cheers were given to Mrs. Mitchell for performing the opening ceremony.

Mr. Mitchell of Millfield made a few remarks and said he had to thank the members on behalf of his wife for the beautiful silver inkstand and Mr. Leslie for the silver jack, and he could assure them she would always look upon these handsome mementos of the days proceedings with great delight and pleasure. He concluded by appealing to all present to do their utmost to help on the bazaar which was to be held on the 4th and 5th July for the purpose of wiping off the debt on the green.

An enjoyable game was then engaged in.

A group photograph of the company was afterwards taken by Mr. J. C. Brown, Falkirk. At intervals a selection of music was discoursed by the Shieldhill Brass Band, and tea and other refreshments were provided in the ground to the visitors.

Exactly 70 years span the above images. The following text is a feature on our centenary (1874 to 1974) which appeared  in the Falkirk Herald on the 20th of April 1974. Many thanks to the Falkirk Herald and Falkirk District Libraries for making this page possible. 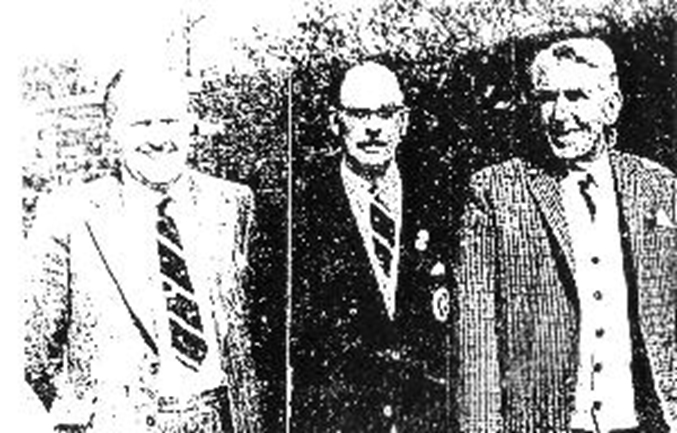 BOWLS, ONE OF THE OLDEST OF OUTDOOR PASTIMES, has been played in Polmont for 100 years. And on Saturday Polmont Bowling Club celebrated the occasion in fine style at the opening of this, their centenary season.

On what was a glorious day for such an event, the green was officially opened by Mrs. Agnes Jamieson, wife of this year’s Club President, Bob Jamieson and a large number of members and guests were present. And some members of the Wallacestone pipe Band entertained the company during the afternoon.

Although the original bowling green was situated at Old Polmont, adjacent to the former school, the bowling activity has, in the main, been concentrated at the present site near Polmont Station.

From the records of “The Falkirk Herald”  dated August 8, 1874, it is interesting to read this extract, which is written as published: “A friendly match betwixt eight members of the Polmont Bowling Club took place on the bowling green of Millfield, kindly granted for the purpose by T. H. Campbell, Esq., on the evening of Monday last.

The Polmont Club is a new club but apparently a healthy one, and the pluck exhibited by them on the occasion was extremely gratifying, even to their opponents, who are a maturer lot, and really had a few heavy prize takers among them. It was evident, too, that the skill of Polmont Club, in some respects, was not in six weeks’ standing, and the drivers or skips, shewed some rare mettle, both in direction and drawing, Polmont was, indeed, in very good fettle, and rather surprised skip Morton of Linlithgow at the close in drawing and wicking, notwithstanding the daring of Johnnie, and the laying out of guards to prevent him drawing, running, smashing and fluking it.